The Paul, Weiss Litigation Department is led by a team of the country’s most accomplished trial lawyers. Our litigators in New York, San Francisco and Washington, D.C. handle the most complex and demanding lawsuits, class actions, government investigations, criminal prosecutions and restructurings. Our clients include Fortune 50 corporations and other prominent companies in the financial services, investment, medical device, pharmaceutical, sports, technology, energy, media and insurance industries. Every day, we are called on by chief executives, board chairs, general counsel, investors and entrepreneurs for our unmatched trial skills, sophisticated business judgment and renowned strategic advice.

The Federal Trade Commission (the "FTC") has revised the jurisdictional and filing fee thresholds of the Hart-Scott-Rodino Antitrust Improvements Act of 1976 (the "HSR Act") and the Premerger Notification Rules (the "Rules"). The adjustments to the dollar thresholds of the HSR Act and Rules (based on changes in the gross national product) are required by the 2000 amendments to the HSR Act. For 2016, the thresholds will increase as a result of the increase in the GNP. The new thresholds take effect onFebruary 25, 2016 and will apply to transactions that close on or after that date.

The HSR Act requires parties intending to merge or to acquire assets, voting securities or certain non-corporate interests to notify the FTC and the Department of Justice, Antitrust Division, and to observe certain waiting periods before consummating the acquisition if certain filing thresholds are met. Notification and Report Forms must be submitted by the parties to a transaction if both the (1) size of transaction and (2) size of parties thresholds are met, unless an exemption from filing applies.

1) Size of Transaction:
The minimum size of transaction threshold is $78.2 million, increased from the 2015 threshold of $76.3 million.

The various jurisdictional thresholds, notification thresholds, filing fee thresholds and thresholds applicable to certain exemptions will also increase as summarized in Appendix A to this memorandum.

The FTC has also increased, effective immediately, the thresholds that prohibit, with certain exceptions, competitor companies from having interlocking relationships among their directors or officers under Section 8 of the Clayton Act. Section 8 provides that no person shall, at the same time, serve as a director or officer in any two corporations that are competitors, such that elimination of competition by agreement between them would constitute a violation of the antitrust laws. There are several "safe harbors" which render the prohibition inapplicable under certain circumstances, such as when the size of the corporations, or the size and degree of competitive sales between them, are below certain dollar thresholds. Competitor corporations are now subject to Section 8 if each one has capital, surplus, and undivided profits aggregating more than $31,841,000, although no corporation is covered if the competitive sales of either corporation are less than $3,184,100. Even when the dollar thresholds are exceeded, other exceptions preventing the applicability of Section 8 may be available (e.g., the percentage of competitive sales relative to total sales).

Summary of Revised Jurisdictional Thresholds of the HSR Act and Rules 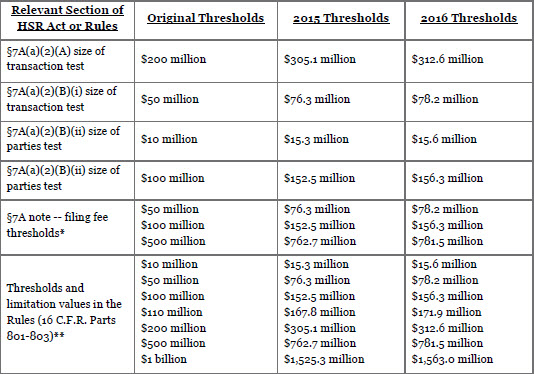 ** The $200 million and $500 million limitations set forth in Rule 802.3 for acquisitions of certain carbon-based mineral reserves remain unchanged.

Litigation partner Jacqueline Rubin will participate in a panel, “Responding to a Complaint,” as part of the Practising Law Institute’s Pretrial Practice 2021 program.

The SEC’s Division of Examinations published a Risk Alert highlighting observations of deficiencies and internal control weaknesses from recent examinations of investment advisers offering products, including private funds, whose…

Litigation partner Chris Boehning was featured in the latest episode of the Institute of International Bankers’ “Bank Talk” podcast series.

Litigation partner Kannon Shanmugam was recognized as a 2021 “Appellate Litigator of the Year” by Benchmark Litigation as part of its annual U.S. awards program.

Paul, Weiss is shortlisted in the Global Competition Review (GCR) awards as one of the top five firms in the Antitrust “Law Firm of the Year – Americas” category, and Paul, Weiss representations are also shortlisted five times in…