Our lawyers provide innovative and practical counsel on a wide variety of capital raising and securities law compliance matters. We represent clients ranging from emerging private companies to established public companies. With each, we build long-term relationships, generating efficiencies and helping them realize their business goals.

The SEC has finalized its pay-for-performance disclosure rules, largely as proposed (available here). These rules implement Section 14(i) of the Securities Exchange Act of 1934 (the “Exchange Act”), as added by Section 953(a) of the Dodd-Frank Act. Section 14(i) directs the Commission to adopt rules requiring reporting companies to disclose in a clear manner the relationship between executive compensation actually paid and the financial performance of the company.

Although the Summary Compensation Table and accompanying tables already required under Item 402 of Regulation S-K are subject to detailed rules with respect to various elements of executive compensation, and many CD&As describe pay-for-performance using metrics chosen by the company, there has not been any requirement for tabular disclosure showing  executive compensation relative to a uniform measure of the company’s financial performance. These new pay-for-performance rules will require reporting companies to disclose in their proxy and information statements a new standardized figure for compensation “actually paid” (that is, total compensation otherwise reported in the proxy with the adjustments to pension and equity award methodologies) to the principal executive officer and  to the remaining named executive officers; tabular disclosure of certain performance measures, including absolute and relative total shareholder return and net income; and a description of the relationship between the performance measures and compensation. Disclosure will be required for the last five fiscal years, subject to a transition period.

The rules will become effective 30 days following publication of the release in the Federal Register, and the new disclosure will be required in proxy and information statements disclosing compensation for fiscal years ending on or after December 16, 2022.  For companies with calendar year fiscal years, this means that they will need to promptly start collecting the information to prepare this disclosure, which for many companies will be part of filings in the next six to eight months, which gives a short lead‑time for compliance.

New Item 402(v) of Regulation S-K requires companies to disclose, in any proxy or consent solicitation material for an annual meeting of shareholders, in tabular format for each of the last five fiscal years:

An example of the tabular disclosure required by new Item 402(v) is set forth below (items marked with an asterisk are not required to be presented by smaller reporting companies): 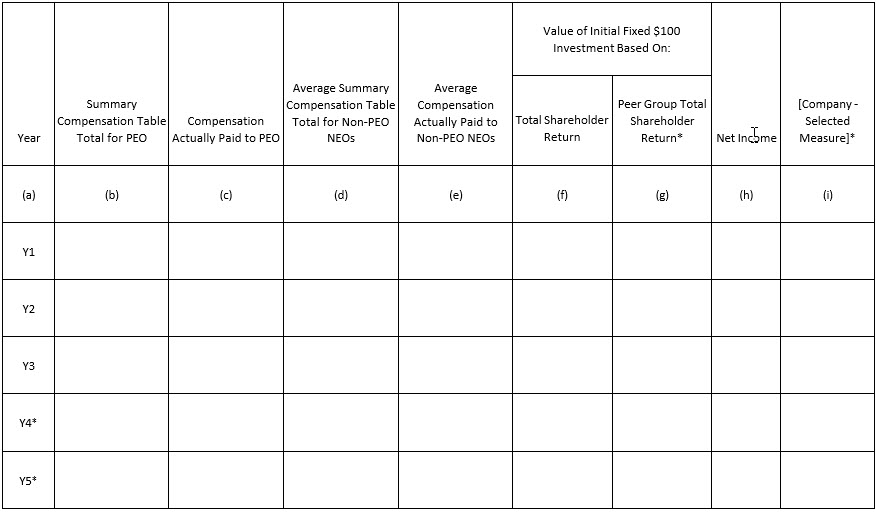 A company will be required to include footnotes to the pay-for-performance table disclosing the amounts deducted from and added to the total compensation reported in the Summary Compensation Table pursuant to the adjustments described above, together with the valuation assumptions used by the company in valuing equity awards added in the determination of compensation actually paid (if those assumptions are materially different from the grant date assumptions otherwise disclosed).

Companies will also be required to list (also in tabular form) at least three, and up to seven, of the most important financial performance measures they use to link executive compensation actually paid during the fiscal year to company performance. One of these must be the company-selected measure included in the tabular disclosure. Companies may include non-financial performance measures in the list if they are among their most important performance measures. The measures need not be ranked. Companies need not present the methodology for calculating the measure, though they may, if it would be helpful to investors or necessary to prevent the disclosure from being misleading. The determination of “most important” should be made with reference to the most recently completed fiscal year.

Companies may present one list for all NEOs, two lists (one for the PEO and one for the other NEOs), or a list for each NEO.

Companies may choose to include additional measures of compensation or financial performance. These may be included in the table (in which case the company must also include a clear description of the relationship between executive compensation actually paid to the registrant’s PEO, and, on average, to the other NEOs, and that measure) or in other disclosure.

Any such measures or concepts must not be misleading, be clearly identified as supplemental (for example, by labeling any column as supplemental information), and not presented with greater prominence than the required disclosure.

If any company selected measure or additional measures are non-GAAP measures, the company will be required to disclose how it calculates such measure from its audited financial statements (but will not need to otherwise comply with non-GAAP measure disclosure requirements).

If a company has had more than one PEO during the period covered by the table, it will be required to include separate total compensation and actually paid columns for each PEO.

The SEC did not specify a location for the new disclosure items. Some companies may wish to include these items in the CD&A, but the SEC noted that including this information in this manner would suggest that the company considered the pay‑for‑performance relationship (as disclosed) in its compensation decisions, which may or may not be the case.

The new Item 402(v) disclosures will not be required in any filings under the Securities Act or Exchange Act other than a proxy or information statement, and will not be deemed to be incorporated by reference into any other SEC filing, unless the company specifically states otherwise.

Finally, the SEC will require the new disclosure to be tagged using XBRL formats.

Paul, Weiss is pleased to announce that 11 attorneys have been elected to the firm’s all-equity partnership, effective January 1, 2023.

The SEC recently adopted amendments to rescind parts of its 2020 rulemaking and guidance on proxy voting advice. These amendments address the concerns of proxy advisory firms and investors regarding the adverse cost, independence,…

Paul, Weiss was shortlisted in four categories by Asian Legal Business for its 2022 Japan Law Awards.

A Paul, Weiss-led transaction is shortlisted for "High Yield Deal of the Year" in the International Financial Law Review's 2022 IFLR Americas Awards

Paul, Weiss was shortlisted for three “Deals of the Year” as part of International Financial Law Review’s Europe Awards 2022.

The Paul, Weiss Capital Markets Group won a Law360 “Practice Group of the Year” recognition for its outstanding achievements in 2020.

Two Paul, Weiss transactions have been named 2019 “Deals of the Year” by the China Business Law Journal. The firm was recognized for its representation of China-based utilities company State Grid International Development Limited in…