Our lawyers provide innovative and practical counsel on a wide variety of capital raising and securities law compliance matters. We represent clients ranging from emerging private companies to established public companies. With each, we build long-term relationships, generating efficiencies and helping them realize their business goals.

The SEC has proposed long-awaited amendments to modernize Schedule 13D and 13G beneficial ownership reporting (available here).  If implemented, these changes will significantly enhance disclosure around bloc holdings, including by activist hedge funds.  Among other things, the proposed amendments would:

The new disclosure regime could have a significant impact on some activist campaigns.  Activist hedge funds often seek to acquire a significant number of shares during the “interim period” between crossing the 5% threshold and publicly filing a Schedule 13D – at which point the public company’s stock price may increase as a result of the activist’s investment, making subsequent share acquisitions more expensive.  In addition, the public company’s board of directors may adopt a shareholder rights plan at the time of the activist’s Schedule 13D filing.  Changing the “interim period” from 10 calendar days to 5 calendar days could therefore result in activists acquiring significantly fewer shares in targeted companies.

These proposed rules will be subject to a comment period to end 30 days after publication of the proposing release in the Federal Register, or April 11, 2022, whichever is later.  The SEC did not include a proposed effectiveness date for these changes.

The proposed amendments would accelerate all filing deadlines as follows: 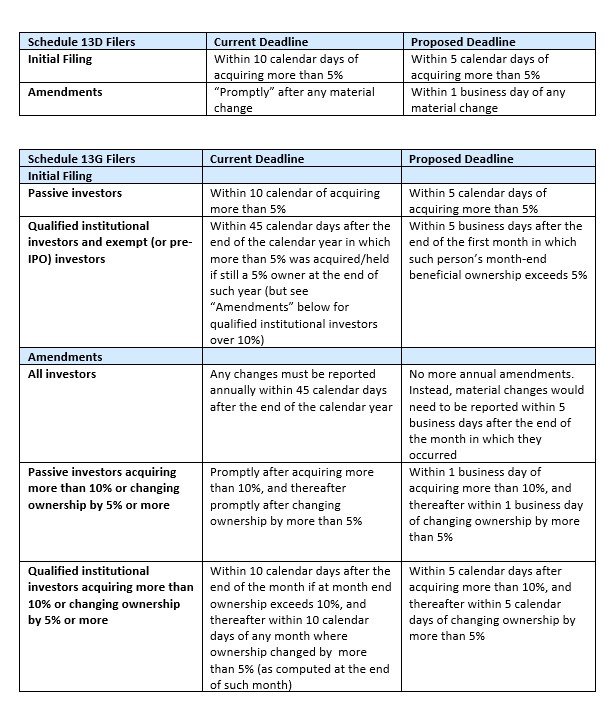 To facilitate meeting these deadlines, the proposed amendments would revise the daily cutoff for Schedule 13D and Schedule 13G filings to 10:00 pm Eastern time (from 5:30 pm Eastern time).  As is currently the case, any deadline that falls on a Saturday, Sunday or federal holiday would be pushed to the next business day thereafter.

Activist hedge funds often use cash-settled swaps.  Currently, holding cash-settled derivative securities does not typically give rise to beneficial ownership.  This would change under the proposed amendments, which would deem holders of cash-settled derivative securities to be the beneficial owner of the reference equity securities if the derivatives are held with the purpose or effect of changing or influencing the control of the issuer of the reference securities, or in connection with or as a participant in any transaction having such purpose or effect.  The proposed amendments include formulas to calculate the amount of securities beneficially owned by such a holder, including that only long positions will be taken into account.

The SEC staff has issued prior guidance to the effect that typical activist theses (such as advocating for the sale of all or a significant portion, or the restructuring, of a subject company or pursuing a proxy contest) would generally be considered as exhibiting a control intent such that cash-settled swaps acquired in these contexts would be included in beneficial ownership.   The proposed amendments could therefore result in an activist hedge fund having to disclose its ownership earlier than is currently required.  Institutional investors should generally be able to continue their regular corporate governance engagement activities without tripping the proposed new requirements.

Disclosure of All Derivative Securities Positions on Schedule 13D

Currently, Item 6 of Schedule 13D requires beneficial owners to “[d]escribe any contracts, arrangements, understandings or relationships (legal or otherwise) among the persons named in Item 2 [of Schedule 13D] and between such persons and any person with respect to any securities of the issuer.”  The proposed amendments would revise Item 6 of Schedule 13D to clarify that beneficial owners must disclose interests in all derivative securities that use the issuer’s equity security as a reference security, including those that are settled in cash, and regardless of whether they originate with the issuer or are part of the issuer’s capital structure.

No agreement needed for group formation

In the proposing release, the SEC articulated its position that parties need not have an agreement to act together in order to be a “group” for the purposes of Sections 13(d) and (g); rather they need just to act together.  Concerted actions by two or more persons for the purpose of acquiring, holding or disposing of securities of an issuer may be sufficient, depending on the circumstances, to constitute the formation of a group.  The proposed amendments therefore remove the reference that persons must “agree” to act together to form a group and re-arrange the structure of Rule 13d-5(b) to clarify the SEC’s position.

The proposed amendments provide two new exemptions from group status for beneficial owners who communicate with each other or the company, or who enter into agreements governing the terms of derivative securities, where such communications or agreements are not for the purpose or effect of changing or influencing control of the issuer, and are not made in connection with or as a participant in any transaction having such purpose or effect.

The proposed amendments include technical revisions to clarify that the group acquires any securities acquired by a member of the group after its formation, and that intra-group transfers would not constitutes an additional acquisition by the group.

Application to Section 16 and Other Contexts

Section 13(d) definitions of beneficial ownership and group formation are also used in a number of other contexts, and the implications of these changes will need to be considered if adopted. For example, credit agreements and other debt instruments (e.g., in default provisions and put rights), employment agreements and other compensation arrangements and shareholder rights plans often look to Section 13(d) to determine whether certain stock ownership thresholds have been tripped or a change-in-control has occurred.  Companies, including private companies, will need to review such agreements to determine the impact if the proposed changes to beneficial ownership and group formation provisions are adopted.

Paul, Weiss is pleased to announce that 11 attorneys have been elected to the firm’s all-equity partnership, effective January 1, 2023.

The SEC recently adopted amendments to rescind parts of its 2020 rulemaking and guidance on proxy voting advice. These amendments address the concerns of proxy advisory firms and investors regarding the adverse cost, independence,…

Paul, Weiss was shortlisted in four categories by Asian Legal Business for its 2022 Japan Law Awards.

A Paul, Weiss-led transaction is shortlisted for "High Yield Deal of the Year" in the International Financial Law Review's 2022 IFLR Americas Awards

Paul, Weiss was shortlisted for three “Deals of the Year” as part of International Financial Law Review’s Europe Awards 2022.

The Paul, Weiss Capital Markets Group won a Law360 “Practice Group of the Year” recognition for its outstanding achievements in 2020.

Two Paul, Weiss transactions have been named 2019 “Deals of the Year” by the China Business Law Journal. The firm was recognized for its representation of China-based utilities company State Grid International Development Limited in…