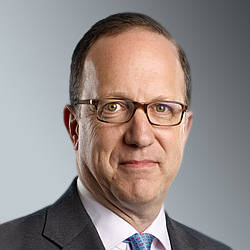 David Fein is Special Counsel in the Litigation Department, based in the firm’s London office. A former U.S. Attorney, David has extensive experience in the areas of government and internal investigations, corporate governance, and white collar and regulatory matters, and he has a proven track record of forming and supporting public-private partnerships. His practice focuses on these areas, as well as crisis management, cybersecurity, data privacy, ESG, and financial institutions.

David has broad and deep senior-level in-house, government and private practice experience. He served as group general counsel at Standard Chartered from 2013 to 2021, where he was a member of the bank’s senior most executive leadership team; oversaw the legal, company secretary, and shared investigative services functions; developed and executed legal strategies; and managed a global team of 700 colleagues across 70 markets. Prior to his in-house role, David served as U.S. Attorney for the District of Connecticut (2010-2013) and as founder and chair of a leading law firm’s white collar practice (1997-2010).

Earlier in his career, David served as Associate White House Counsel during the Clinton administration and Assistant U.S. Attorney in the Southern District of New York, where he served as Deputy Chief of the Criminal Division and Counsel to the U.S. Attorney. David created and taught for ten years a class on federal criminal prosecution at Yale Law School.

David is the chair of the United for Wildlife Financial Taskforce, a global network of financial institutions and public and civil society partners working together to reveal, disrupt and prevent illegal wildlife trafficking. He is a board member of the American Friends of the Royal Foundation of the Duke and Duchess of Cambridge and also serves on the board of Guiding Eyes for the Blind. David chaired Standard Chartered’s flagship philanthropic initiative, Seeing is Believing, raising over $100 million to fight avoidable blindness throughout the world.

Litigation special counsel David Fein will participate in a discussion, “The Impact of Collaboration,” as part of the Royal United Services Institute’s Future of Financial Intelligence Sharing “Collaboration in Combating Economic…

The United States increased pressure on Russia to de-escalate its conflict in Ukraine through new sanctions targeting individuals and entities critical to Russia’s war efforts, as well as against the provision of accounting, trust and …

In a significant expansion of sanctions, President Biden recently issued an executive order prohibiting “new investment” in Russia by U.S. persons, wherever located.

David Fein has joined the firm as special counsel in the Litigation Department in London.

The DOJ recently announced the seizure of a Russian oligarch’s luxury yacht, marking the first seizure by Task Force KleptoCapture, an interagency task force led by the DOJ and focused on enforcing Russian sanctions.

OFAC recently announced its second-ever settlement with a U.S. company relating to apparent violations of OFAC’s sectoral sanctions program. OFAC determined that, by re-issuing and re-dating an invoice to the state-owned Russian oil…