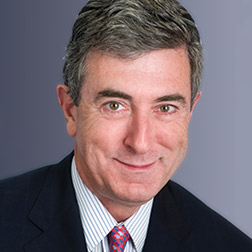 Of counsel in the Corporate and Litigation Departments, Stephen Lamb focuses his practice on Delaware corporate law and governance issues arising in a variety of transactional and litigation contexts.

Judge Lamb joined Paul, Weiss in 2009 from the Delaware Court of Chancery, where he had served as Vice Chancellor since 1997. While on the Court of Chancery, Judge Lamb decided many important corporate and commercial law matters, including the multibillion-dollar Huntsman/Hexion merger agreement dispute, the fight over the governance of IAC/Interactive Inc. and many other significant cases. Over the course of his 12 years of service, Judge Lamb gained a national reputation as a knowledgeable, fair and efficient jurist.

Some of Judge Lamb's recent representations include:

Judge Lamb continues to lecture and write on numerous corporate governance and Delaware law issues. He is recognized as a leading Delaware Chancery lawyer by Chambers USA and by Lawdragon as one of the 500 leading lawyers in the United States. He is a member of the American Law Institute and the Delaware State Bar Association. Judge Lamb is also a founding member of NYSE Euronext's Commission on Corporate Governance.

Early in his career, Judge Lamb served as a Special Counsel in the Office of the General Counsel of the United States Securities and Exchange Commission.

Paul, Weiss advised National General Holdings Corporation in its sale to the Allstate Corporation for approximately $4 billion in cash.

Paul, Weiss won a major trial victory for client Channel Medsystems in the first case since the Delaware Supreme Court’s landmark 2018 decision in Fresenius v. Akorn to evaluate whether a merger party was justified in terminating a…

Recently in In re Xura, Inc. Stockholder Litigation, the Delaware Court of Chancery denied a motion to dismiss fiduciary duty claims against the CEO of Xura, Inc. for his actions in negotiating a sale of the company

The Delaware Court of Chancery recently held in In re Tangoe, Inc. Stockholders Litigation that directors who approved a sale of the company were not entitled to business judgment protection under Corwin v. KKR Financial Holdings LLC…

In Flood v. Synutra International, Inc., the Delaware Supreme Court affirmed the Court of Chancery’s holding that the controlling shareholder satisfied MFW’s “ab initio” requirement by conditioning the deal on the required procedural…

In this issue of the Paul, Weiss Delaware M&A Quarterly, we discuss several decisions of significance to the M&A practice issued during the third quarter of 2018.

Paul, Weiss secured a major victory for German healthcare group Fresenius SE & Co. when the Delaware Court of Chancery ruled that Fresenius was justified in canceling its $4.8 billion agreement to acquire Illinois-based Akorn,…