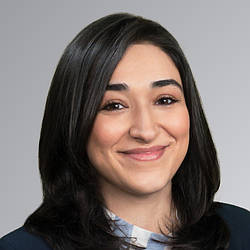 Hon. Reggie B. Walton, United States District Court for the District of Columbia

Hon. Reggie B. Walton, United States District Court for the District of Columbia

An associate in the Litigation Department, Arpine Lawyer focuses on a range of complex civil litigation matters, with a focus on antitrust and commercial disputes, as well as compliance and regulatory defense matters. She has represented clients in matters involving a variety of industries, including technology, media and private equity.

Arpine was a key associate on the trial team representing a large technology company in a high-profile antitrust action as well as the trial team in the landmark civil rights case Sines v. Kessler, the lawsuit against the leaders of the neo-Nazi and white supremacist movements in America responsible for the racially motivated violence in Charlottesville, VA, in 2017. She was also a member of the team representing a large technology company in securing the dismissal of a putative consumer class action asserting federal and state antitrust and unfair competition claims. In addition, Arpine was part of the team representing Amazon in securing the dismissal of a major antitrust lawsuit filed by the D.C. Attorney General challenging Amazon’s pricing policies nationwide.

The American Lawyer recognized litigation partner Karen Dunn as a “Litigator of the Week” for her part in the $26 million jury verdict against white supremacist and neo-Nazi groups in federal district court in Charlottesville.