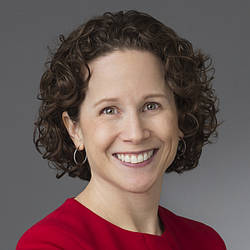 Karen Dunn is one of the nation’s top trial lawyers and is widely recognized for securing courtroom victories in difficult cases. Karen is also highly skilled at crisis management, advising companies, public figures and boards of directors as they navigate reputation-threatening investigations, government inquiries and media scrutiny—often all at the same time. She has been named a “Litigator of the Year” by The American Lawyer for her role in “high-stakes, high-profile and hard-fought” cases and has been recognized as a “Band 1” trial lawyer and a “Star Individual” by Chambers and Partners, which reports that Karen’s clients view her as “a go-to lawyer for your toughest, most challenging problems.”

Karen has successfully led many of the largest and most important trials of the past decade, including Waymo LLC v. Uber Technologies, Inc., the hotly contested trade secrets “battle royale,” which settled favorably for Uber shortly after Karen’s examination at trial of former CEO Travis Kalanick; Malden Transportation, Inc. v. Uber Technologies, Inc., where she delivered a complete defense victory in a $750 million dispute after being brought in to lead the trial team just six weeks before trial; Zehn-NY LLC v. The City of New York, representing Uber in its challenge to New York City’s so-called “cruising cap,” which was struck down as arbitrary and capricious; Epic Games Inc. v. Apple Inc., the high-stakes challenge to the App Store by the makers of Fortnite, which ended in victory for Apple following a three-week trial; Apple Inc. v. Qualcomm Incorporated, where she secured a $4 billion summary judgment win for Apple in the lead-up to trial; the Apple iPod iTunes Antitrust Litigation, a billion-dollar class action, which ended in a complete defense jury verdict; Oracle USA, Inc. v. Rimini Street, Inc., a copyright infringement and computer fraud dispute, Monster, LLC v. Beats Electronics, LLC, winning summary judgment for Beats on the eve of trial.

She has also led trial teams in landmark civil rights cases, including Sines v. Kessler, a pathbreaking lawsuit against the leaders of the neo-Nazi and white supremacist movements in America responsible for the racially-motivated violence in Charlottesville, VA in 2017; and Council of the District of Columbia v. Gray, a hard-fought two-year battle in local and federal court to secure budget autonomy for the District of Columbia.

Karen is also go-to counsel for clients in high-profile government, law enforcement and sensitive internal investigations. Among others, she prepared Amazon Chairman Jeff Bezos for his testimony before the House Judiciary Committee; represented key witnesses asked to appear before the congressional committee investigating the killing of Americans in Benghazi; the New York Attorney General’s independent investigation of sexual harassment allegations against former Gov. Andrew Cuomo; represented a high-profile witness in the course of simultaneous investigations by the Department of Justice, an agency Inspector General and a congressional committee; and guided a major university in responding to sexual abuse allegations concerning a former university official. She has led debate preparations for presidents, vice presidents, and senators for consequential debates in every federal election cycle since 2008 including for President Barack Obama, Secretary Hillary Clinton, and Vice President Kamala Harris. She also often serves as an on-air commentator on politics and the law.

Karen is recognized as a “Star Individual” by Chambers in General Commercial Litigation and “Band 1” in the Trial Lawyers and Crisis Management categories. Chambers reports that Karen’s clients call her “one of the best lawyers on the planet,” “a go-to lawyer for your toughest, most challenging problems” with “a great ability to think on her feet” and that she has “attained an ‘amazing reputation’ for her role assisting corporate clients with some of their most high-profile crises.” Karen has also been ranked Tier 1 in Leading Trial Lawyers by The Legal 500 and one of Benchmark Litigation’s “Top 10 Women in Litigation” and “Top 100 Trial Lawyers.”

Karen has been named a “Litigator of the Week” five times in the past three years by The American Lawyer as well as “Litigator of the Year”; one of the National Law Journal’s “Outstanding Women Lawyers”; one of Elle Magazine’s “Most Compelling Women in Washington Now”; and a Law360 “Trials MVP” and a “Technology MVP.”

Karen has served in all three branches of government, including as an Assistant U.S. Attorney in the Eastern District of Virginia; Associate White House Counsel under President Barack Obama; and Senior Advisor and Communications Director to former Sen. Hillary Clinton. Karen also led presidential debate prep for President Obama in 2012, Hillary Clinton in 2016, and Vice President Kamala Harris in 2020. Earlier, she served as a law clerk to Judge Merrick B. Garland of the D.C. Circuit Court of Appeals and to Justice Stephen G. Breyer of the U.S. Supreme Court.

Litigation partner Karen Dunn was featured in a Lawdragon “Lawyer Limelights” Q&A highlighting her many trial accomplishments over the past decade.

Benchmark Litigation interviewed litigation partner Karen Dunn in a Q&A highlighting her recent trial wins, including a pro bono victory on behalf of the plaintiffs in Sines v. Kessler, a historic victory against the white…

Paul, Weiss has launched a new Civil Rights and Racial Equity Audit Practice, which is among the nation’s first dedicated legal teams focused on conducting racial equity and other civil rights audits, helping companies, boards and…

Paul, Weiss, alongside co-counsel, secured a major victory in Sines v. Kessler on behalf of nine pro bono clients who were injured in the violence during the August 2017 “Unite the Right” rally in Charlottesville, Virginia. In this…

Litigation partner Karen Dunn will participate in a panel, “Trial of Complex Cases During a Pandemic,” during Northwestern Pritzker School of Law’s conference on “Contemporary Issues in Complex Litigation.”

Litigation partner Karen Dunn was recognized as a 2023 “Leading Commercial Litigator” by the Daily Journal.

Paul, Weiss was recognized, along with Kaplan Hecker & Fink and Cooley LLP, for “Best Provider Collaboration,” in the American Lawyer’s 2022 Industry Awards.

Litigation partner Karen Dunn was recognized as a Law360 2022 “MVP” in the Trials category.