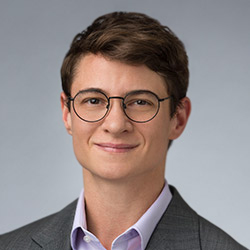 Alexia Korberg (they/them) is a partner in the Litigation Department and Deputy Chair of the M&A Litigation Practice Group, where they specialize in complex civil litigation. They represent clients in high-stakes commercial disputes across a range of industries, including private equity, media, banking, technology, and biomedicine. Alexia has significant trial experience and practices in both state and federal courts, including at the appellate levels, and in arbitration.

In addition to their robust commercial practice, Alexia has also developed a nationally-recognized constitutional impact litigation practice and has litigated several consequential pro bono matters in courts throughout the country including, most recently, at the Supreme Court in Dobbs v. Jackson Women's Health Organization.

Alexia's first career was in private equity, and they apply their concomitant understanding of finance, securities, and business to all of their commercial representations.

Alexia was named a 2021 “Young Lawyer of the Year” by The American Lawyer for their nationally prominent work as a tireless defender of women’s reproductive rights, LGBTQ+ people and immigrants, as well as their high-profile litigation achievements and commitment to improving the legal profession. The New York Law Journal named Alexia a “Rising Star” in 2020; the New York State Bar Association presented them with the “Outstanding Young Lawyer” award in 2020; Benchmark Litigation named them to the “40 & Under Hot List” each of the past three years; Lawdragon named them to the "500 Leading Litigators in America" list in 2022; the LGBT Bar Association recognized them as one of the “Best 40 LGBTQ+ Lawyers Under 40” in 2019; and the American Bar Association honored Alexia with its “On the Rise Top 40 Young Lawyers” award in 2018.

Alexia is an experienced trial lawyer, strategist and courtroom advocate. They have litigated numerous trials and arbitrations, including several recent high-stakes deal-related disputes on behalf of private equity firms in the Delaware Court of Chancery.

Alexia also has an active pro bono practice. They were part of the legal team that successfully litigated U.S. v. Windsor from the district court to the Supreme Court, helping to establish a constitutional right to same-sex marriage, as well as a series of cases in Mississippi that invalidated the state’s bans on both gay marriage and adoption. Alexia has also authored several Supreme Court amicus briefs, including on behalf of lawyers who have had abortions.

Alexia’s work has been featured in The New York Times, The Washington Post, the National Law Journal, The American Lawyer, Slate and elsewhere, and they are regularly invited to speak about their practice.

Education and Board Service

They serve on the Board of Directors of the Point Foundation, the nation’s largest scholarship-granting organization for LGBTQ students of merit.

Litigation partner Alexia Korberg will present a session on “When the Deal Goes Wrong: Enforcing Corporate Agreements and the Importance of Boilerplate,” as part of the Practising Law Institute’s Drafting and Negotiating Corporate…

Alexia Korberg Discusses Their Career at Paul, Weiss on Bouncing Back, a Podcast About Resilience for Lawyers

Alexia Korberg Discusses Their Career at Paul, Weiss on Bouncing Back, a Podcast About Resilience for Lawyers

Litigation partner Alexia Korberg appeared on the most recent episode of the podcast Bouncing Back: Resilience for Lawyers, where they shared advice for young lawyers and discussed how they have been able to have a fulfilling and…

Litigation partner Alexia Korberg will lead a session, “When the Deal Goes Wrong: Enforcing Corporate Agreements and the Importance of Boilerplate,” as part of the Practising Law Institute’s “Drafting and Negotiating Corporate…

Litigation partner Alexia Korberg was interviewed on “In Loco Parent(i)s,” a podcast about lawyering and parenting hosted by Karen and Steve Vladeck.

Bloomberg Law recognized Paul, Weiss as one of its inaugural “Pro Bono Innovators” for 2022.

Litigation partner Alexia Korberg has been named a 2021 “Young Lawyer of the Year” by The American Lawyer.

Litigation partners Alexia Korberg, Jeffrey Recher and Brette Tannenbaum have been recognized by Benchmark Litigation in its 2021 “40 & Under Hot List – Northeast.”